The Unique Style Of Korean Ajummas

Everyone has a lot to say about ajummas, from their distinct style to unique behavior. But they're the backbone of Korean culture. 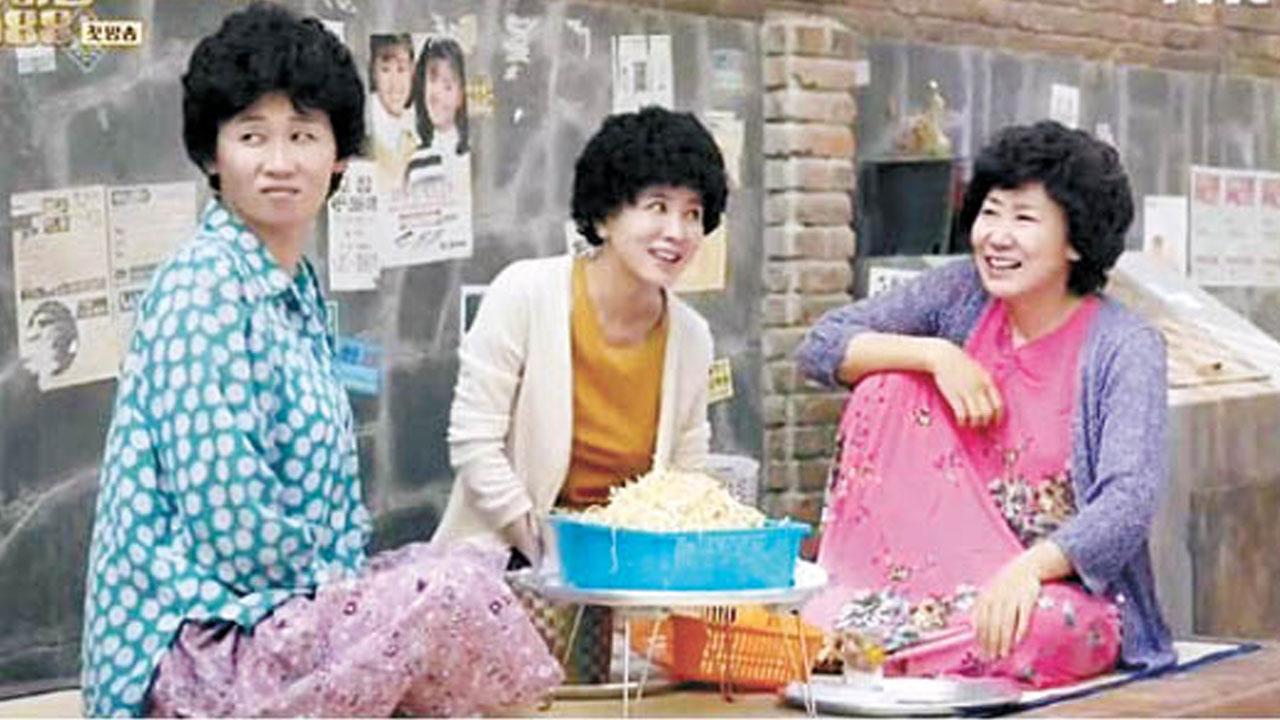 The word "ajumma" (아줌마) usually refers to a middle-aged woman, usually one who is married.

But just going around calling women, "Ajumma!" is still rude. Nobody likes to hear that they look older. Being an ajumma does not just refer to your age or marital status. Being an ajumma is a lifestyle, an identity that lies in hiding, waiting to come forth when Korean women are ready to embrace it.

In fact, you can divide Korea into three distinct groups: men, women, and ajummas.

When they aren't busy shoving their way onto the subway, they have a whole list of things to do to be a true ajumma.

So today, let's talk about the lifestyle and the identity of what it means to be an Korean ajumma. 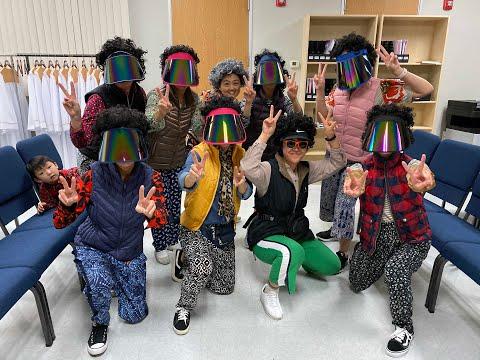 Korean ajummas have a very distinct and unmistakable fashion sense. You can spot it from a mile away.

Let's start with the hat. In the warmer months, when the sun is shining, ajummas always have a tinted sun visor that they wear that looks like something out of a sci-fi movie. It has great functionality for blocking the sun and hiding their identity. 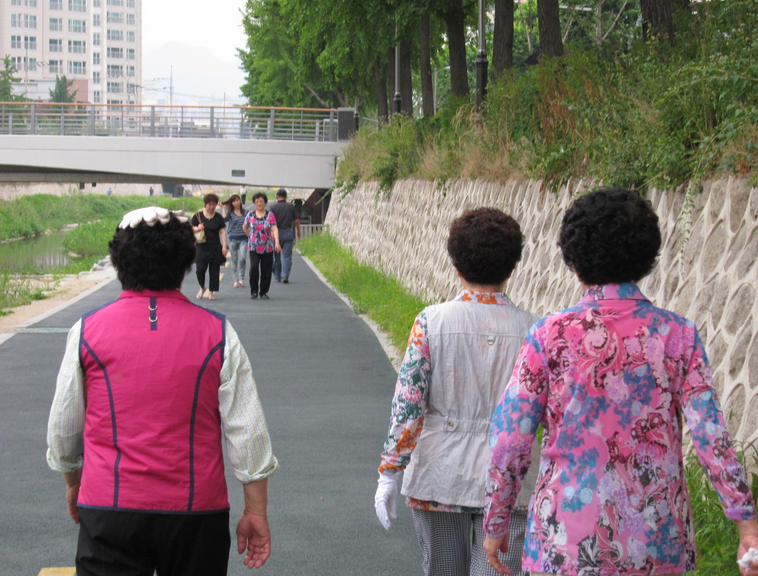 Ajummas also love a good set of mismatched clothes. Whether it's the clash of colors, patterns, or styles, you can almost bet that the wardrobe wont match.

That being said, they do wear a nice set of matching hiking clothes. Nobody looks more like a professional hiker than a Korean ajumma. This is the go-to outfit for ajummas to pack when they go on vacation.

Speaking of colors, ajummas tend to favor bright colors somewhere in the wardrobe, usually in their floral-patterned shirt or vest. it's also not uncommon for them to adorn something reflective. Regarding the ajumma hairstyle, you can bet your bottom dollar that it will be cut short and permed or wavy, resembling an afro of some sort. It's always in season.

We find it endearing that there is such an omnipresent set of fashion standards that everyone in that age group follows. It's cute.

Not only that, but it also has functionality. Their clothes are convenient and flexible.

Finally, the hairstyle is great for covering up thinning or balding spots, giving the appearance of a full head of hair. That can do wonders for one's confidence. 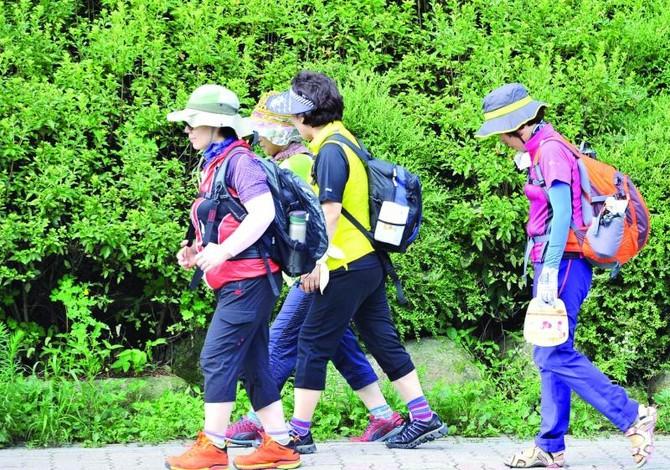 If you've taken the subway in the morning, you've definitely seen at least one, if not a flock of ajummas decked out in their hiking attire, ready to conquer each and every mountain accessible by metro.

Hiking is not just a hobby. It's an opportunity for Ajummas to connect with their friends and spend quality time together.

Overall, ajummas are physically active. Apart from hiking, just taking brisk walks around the neighborhood park or lake is also a common activity.

But they can't do it without swinging their arms as far forward and as far backward as they can, or clapping their hands in front and behind themselves in a continuous round of applause to all things ajumma.

You'll also notice them hanging out around the outdoor exercise equipment, where they are not afraid to invent entirely new exercises that will leave you scratching your head, but leave them feeling healthy because of their increased blood flow. 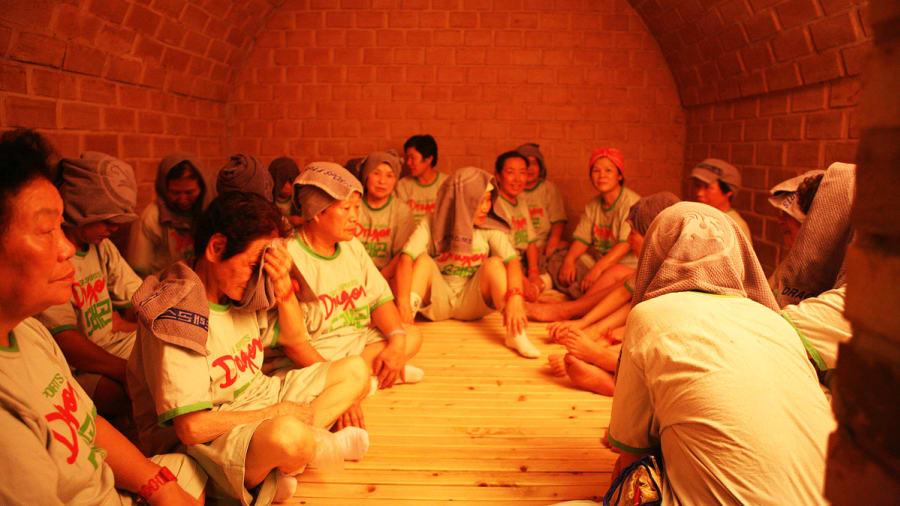 Another really popular lifestyle element for ajummas is visiting the sauna. You can usually see them in large groups using towels as a hat.

They believe that the sauna is good for blood flow and keeping the skin youthful. perhaps that's the secret to Koreans never aging!

If you go to the sauna, you'll find that rooms have various levels of heat. Some even go up to 100 degrees. Most people can only stand being in there for a few minutes, but Ajummas could stay in there for an hour. 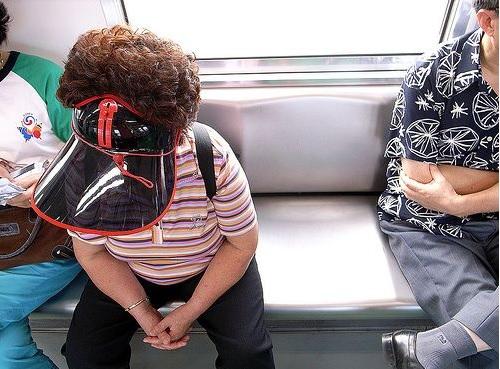 Ajummas are also well known for their particular behavioral traits.

The most common and inevitable experience tourists have in Korea is losing their opportunity to sit in an open subway seat.

Ajummas barrel their way into the subway before others get off if they eye an open seat. And they sprint in, head down and elbows out, ready to jab anyone who might try to get there first. A golden path lights their way, and they mark their territory triumphantly.

Honestly, it's like a renaissance painting watching a group of ajummas enter a subway. Truly, they are masters of getting a seat while the rest of us plebeians are left to stand in wonder.

And not enough words can be said about their athletic ability when it comes to carrying gratuitous amounts of clothes after a shopping trip to Dongdaemun, or lugging a cart full of groceries behind them onto the subway train. 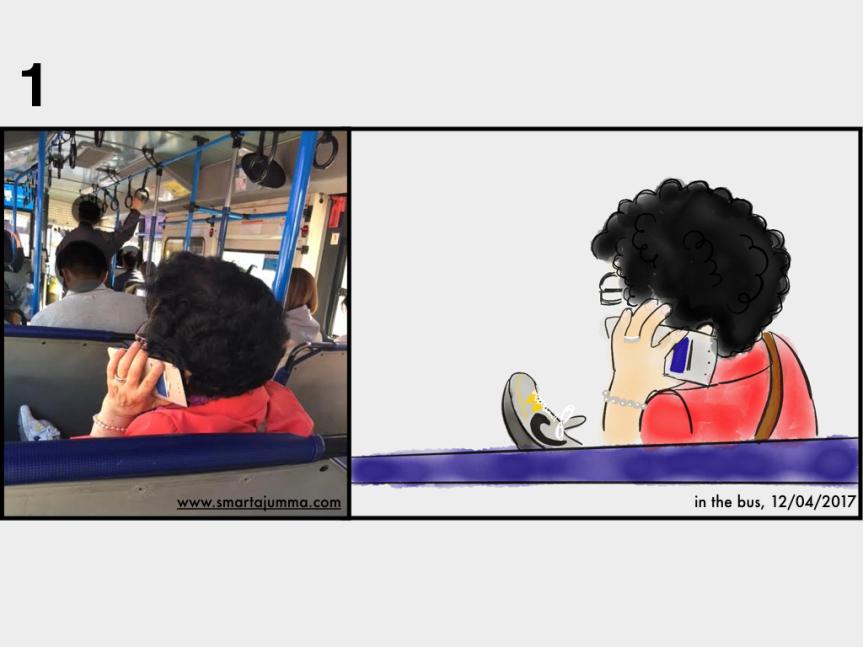 Furthermore, ajummas are the foghorns of public transportation. They can make more noise (and in more ways) than you'd expect.

The first one is the obnoxiously loud ringtone. It's always on maximum volume and it's always the stock ringtone that comes with the phone.

And no matter what, they don't answer it right away. They have to stare at the caller ID and decide if they want to answer it first.

Second, you've never heard anyone chew gum like an ajumma. It's like a sport to them. They chew with the veracity of bears emerging from hibernation.

The third behavioral trait of an ajumma is confidence. Have you ever heard of being humble? Because ajummas haven't.

Ajummas have a special card that says, "I'm awesome." And they flash it at every possible opportunity.

I've even been told to just go sit somewhere else even though I paid for a reserved seat just because an Ajumma didn't like the one she had chosen.

Standing in line? Ajummas don't have time for that. Bike path? You mean walking path. Seat for pregnant women? Ajummas are pregnant with power.

But the final characteristic, and perhaps the most important, is the unlimited amount of friendliness that they're willing to show.

Yes, even after all the jokes, it can't be denied that ajummas are capable of incredible kindness.

If you're lost on a mountain or on the street, they will be willing to help you.

They will offer to give you more food than you can eat.

They're also just some of the most open people to have a conversation with in Korea. Not a lot of people are willing to talk to strangers, but ajummas are always willing to chat on the subway or wherever you find yourself.

Is there a group of people in your country that act like Korean ajummas?

In Korea, ajummas are a pervasive and necessary aspect to Korean culture. Truly, they hold the weight of society on their shoulders.

They may be course around the edges, but they can be really lovely.