The Won-derful History Of Korean Currency

Who Are The People On Korean Notes? The Rare 500-Won Coin Minted In 1998! Great Trivia And History About Korea's Money. As in most countries, Korean currency comes in both notes and coins. In this article, we will take a look at the history of Korean money and learn about people and things that are printed on them!

The woman on the Korean 50,000 won note is no other than Shin Saimdang (신사임당) of the Joseon era.

Due to her filial devotion to her parents and love for children, Shin Saimdang has been held up as a model of Confucian ideals. She was talented and intelligent, known for her art and poems.  Also given the epithet of 현모양처 meaning "Good Wife, Wise Mother”, she was selected for the 50,000 won bill in 2007.

Before the 50,000 note was released in 2009, the 10,000 won note was the highest denomination in South Korea. Because of the rapid economic growth and inflation, the Korean government decided to introduce the new 50,000 won note.

Obvious merits with the new denomination was that the Bank of Korea needed to print less notes, and people could carry around more in their pocket without having to worry about bringing checks and other documents with personal information on them.

But there were also complains that many products previously priced 45,000 won all of a sudden increased in price to 50,000 won.

The person portraited on the green 10,000 won bill is Sejong the Great, the famous king of Joseon. King Sejong is credited with establishing much of what we think of as Korean culture, and he also created the Korean alphabet, hangul.

On the reverse side of the note, you can find the astronomical clock Hocheonsigye as well as a telescope, both created by scientists of the Joseon court.

Yi I was a Korean philosopher who had a huge influence on Confucianism and philosophy in Korea. As such, he frequently appears in history books, and students still learn about his teachings in school.

The reverse side of the note feautures a Chochungdo (flower and insect) painting made by his mother Shin Saimdang.

The star of the blue 1,000 note is the Confucian scholar Yi Hwang. He was one of the two most prominent scholars of the Joseon dynasty, the other being Yi I (who is printed on the 5,000 won note).

Yi Hwang was a master of calligraphy and poetry, and was known as a scholar who wasn’t concerned with either money or status. He was an indispensable figure for the development of Confucian culture during the Joseon dynasty.

Yi Hwang’s pen name was Toegye, and the street Toegye-ro which connects Myeong-dong and Dongdaemun is named after him.

The back of the 1,000 won bill features 계상정거도 (Gyesang Jeonggeodo), a painting of Dosan Seowon by Jeongseon.

Dosan Seowon, a neo-Confucian academy and a UNESCO World Heritage Site, was established by Yi Hwang to teach and train future scholars in his hometown. 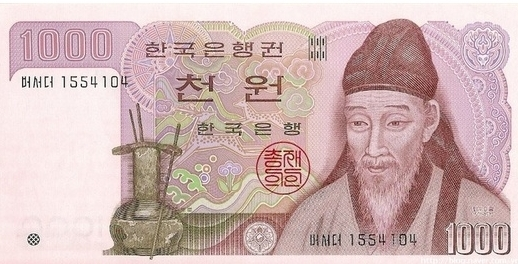 The 500 won coin in circulation today made its appearance at the beginning of the 1980s.

Actually, 500 bills were printed until May 12, 1993. For some years the denomination had both a coin and a note, but the note was slowly phased out.

The Bank of Korea mints new 500 won coins every year, but in 1998 only 8,000 were minted due to the 1997 financial crisis. 500 won coins from this year are rare and worth more than their face value. So you might want to check your purse to look for one!

The Korean hero, admiral Yi Sun-sin (previously found on the old 500-won note), is depicted on the 100-won coin which is in circulation today. Notes were printed for the 100-won denomination until December 1, 1980. 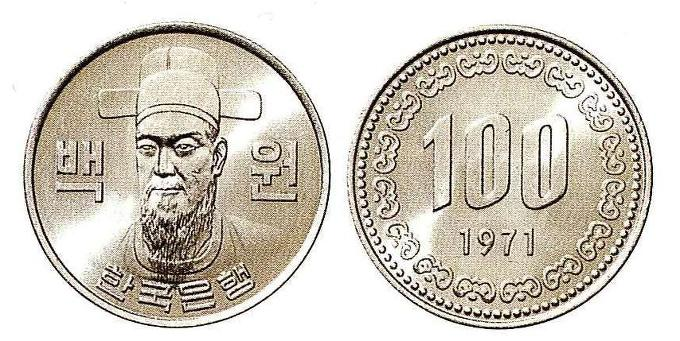 Yi Sun-sin was depicted on the previous 100 won series which was minted until 1983 and is still in circulation.

On the old 100 won note, which is not in circulation anymore, the Independence Gate and Sejong the Great were printed. 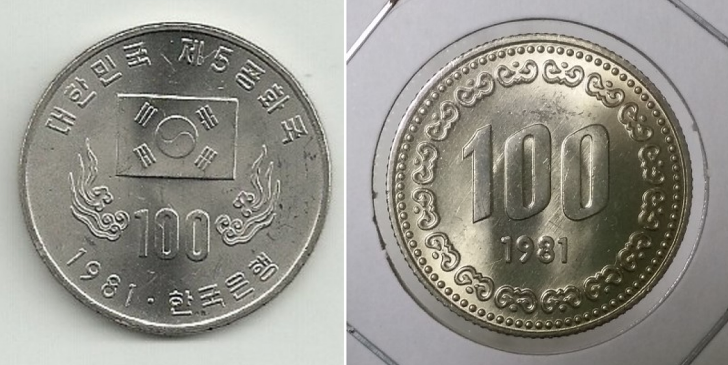 Old versions of the 100-won coin can be quite valuable. Especially the 100 won issued in 1974, as well as coins with the print 제5공화국, meaning "Fifth Republic of Korea,” can sell for quite a lot. 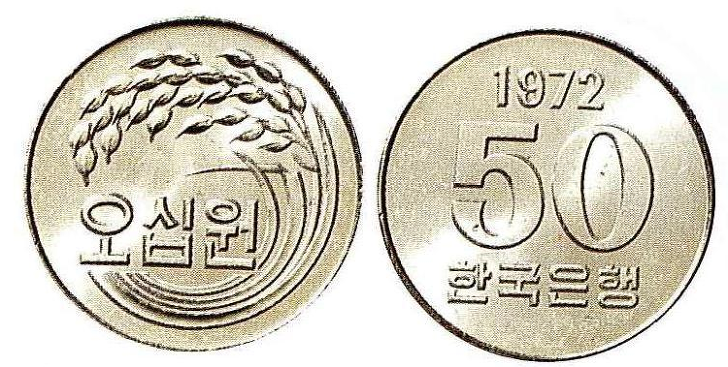 A stalk of rice is printed on the current and the previous series of the 50 won coin.

500 won was printed as a note until 1973. However, the 5,000 won note had been introduced the previous year, and this was the beginning of an inflation which saw both note denominations and market prices rise.

The value of Korean money had fluctuated a lot throughout history, but after introducing stronger monetary policy in 1962, it finally began to stabilize. The introduction of the 5,000 won denomination was the last time the country saw a sudden change in money value. 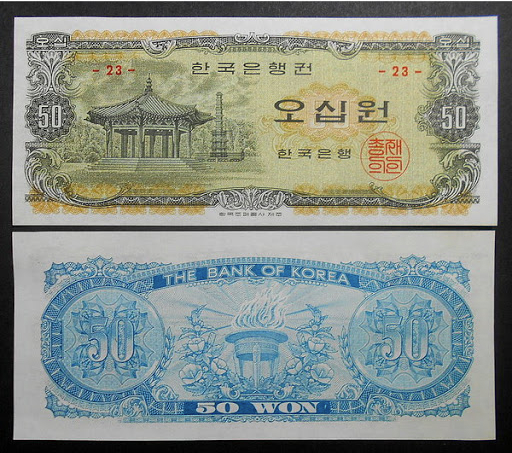 The 50 won note seen above depicts Tapgol Park on the obverse and a beacon on the reverse side. 50 won bills are no longer in circulation, and even the coins are being used less frequently.

Cheomseongdae, the astronomical observatory located in Gyeongju, was printed on the no longer circulating 10 won note (withdrawn in 1973).

10-won coin have through several series had the Dabotap Pagoda printed on it. The original red-brown color was changed to a more yellow nuance in 1983.

However, the cost of minting this version was too high, so they changed the color again in 2006, to a light brown.

Because of their low value, 10-won coins are not that frequently used, which means that they often stay in great shape. 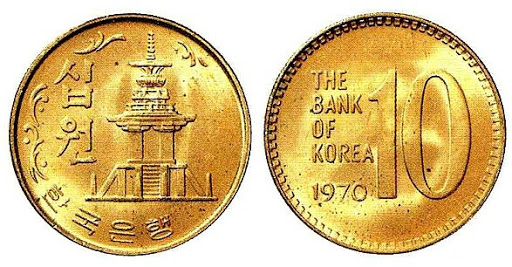 The 5 won and 1 won coins share a lot of history. Both were introduced in 1962 along with the 10 won note. This first versions of the coins were changed to new ones of the same value already in 1966. 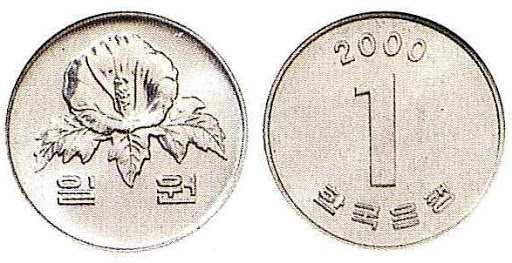 With economic development, inflation, and introduction of higher denominations, the cost of producing lesser coins came to exceed the face value of the coins.

The Korean government have had to spend a lot of money on minting coins with close to no market value. In order to reduce the cost of material, currently minted 1 won and 5 won coins are therefore made extremely light. 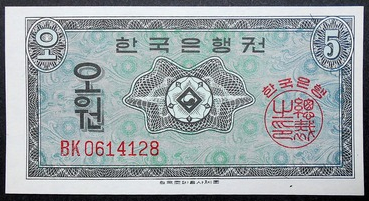 In the 60s, both 1 won and 5 won were also found as bills. Needless to say, you can’t buy anything with a 1 won coin these days.

These days, South Korea is rapidly moving toward becoming a cash-less society, and many Koreans don’t carry around cash anymore.

In the future, perhaps coins and notes will only have a value for collectors. But remember that collectors can sometime pay handsomely for a rare coin or note, so take a look at your cash to see if it's actually worth more than its face value! 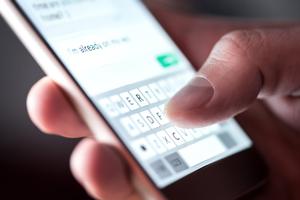