Scary stories of urban legends and ghosts that have struck fear into many Koreans! 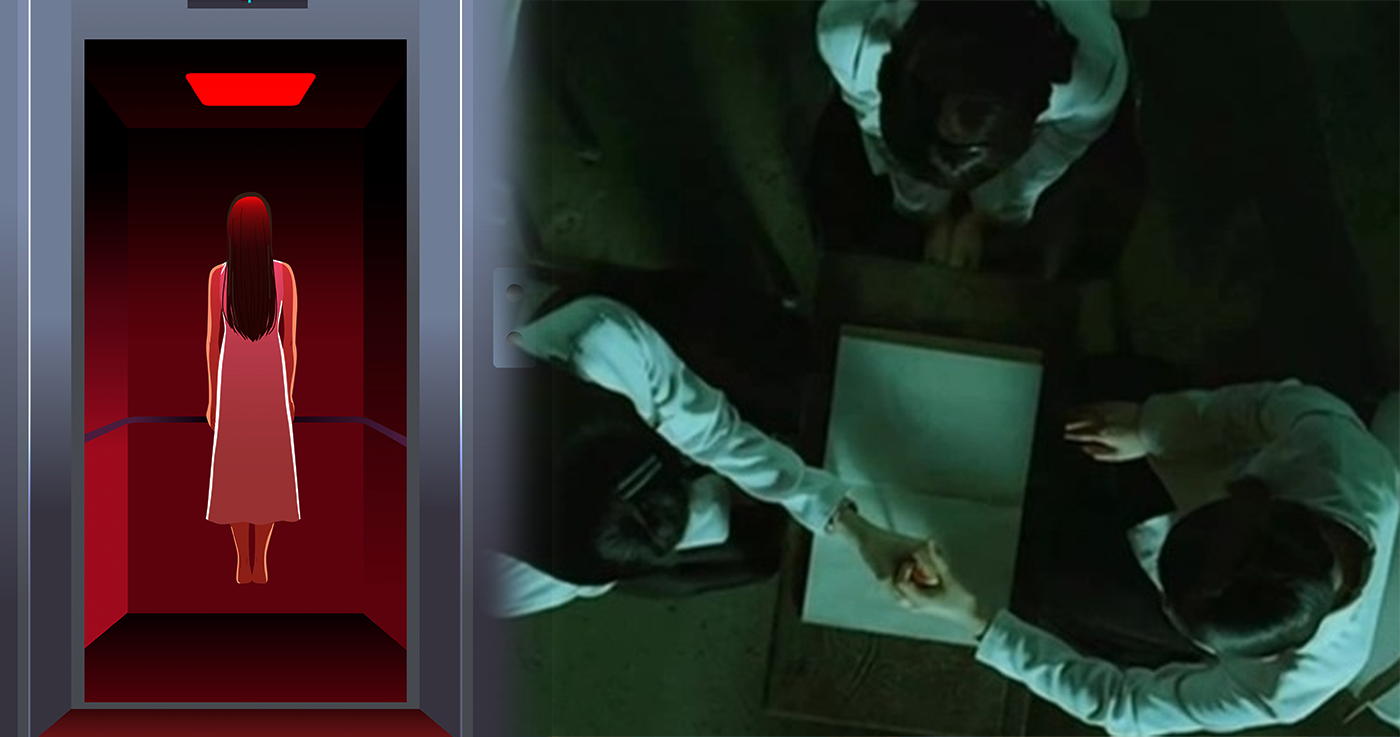 Summer is here, and it's getting hotter by the day. One thing that springs to mind when we think about summer in Korea is urban legends and ghost stories.

Nothing beats a bone-chilling horror story to help us cool down! 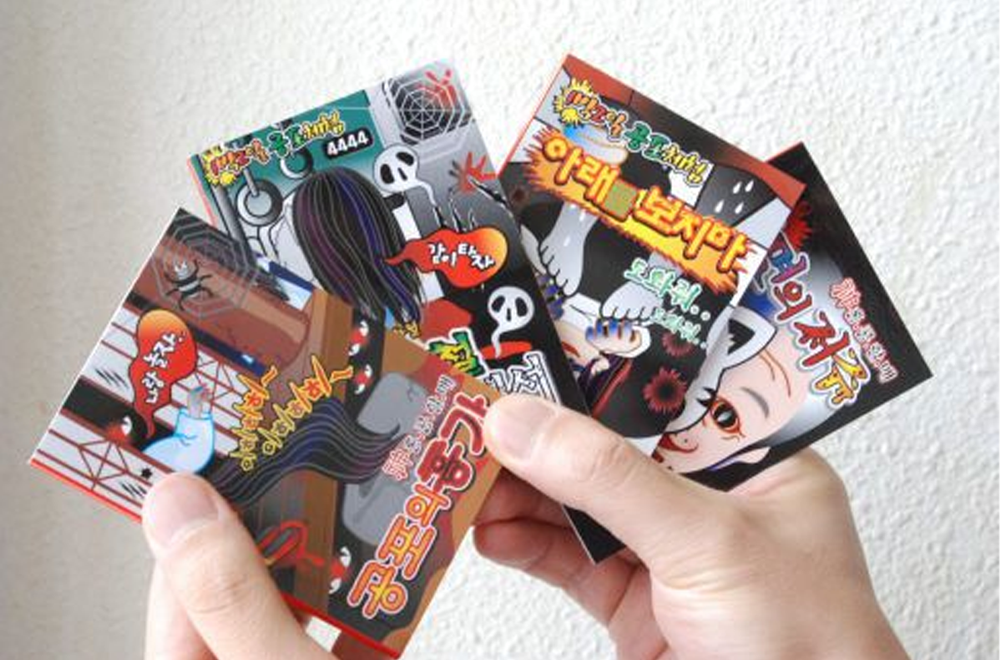 In the early 2000s, these mini comic books were very popular.

Students would buy a book from the stationary store in front of the school and sit down together to read and try to scare each other.

Let's have a look at the urban legends that used to send chills down the spines of Koreans!

We made sure add a link rather than to display pictures that are especially scary. Click the links if you are feeling brave!

The Ghost On Jayu-ro Motorway 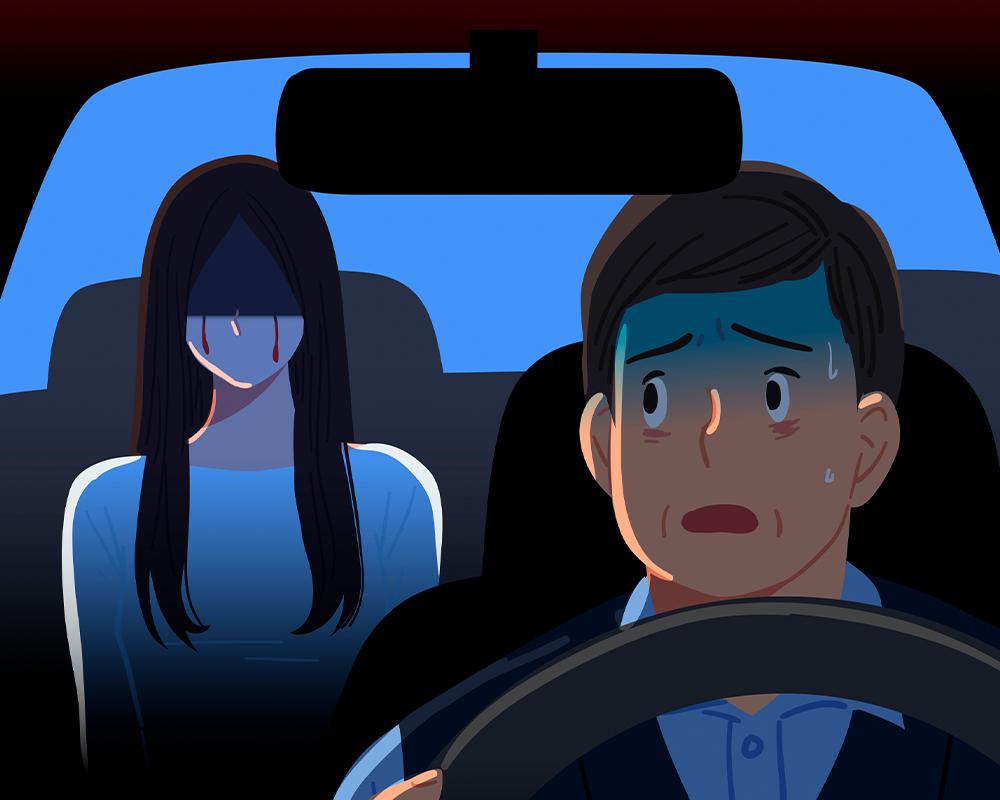 Our first urban legend takes place on Jayu-ro, a motorway that connects Seoul to Paju in Gyeonggi Province.

Many people testified that it looked like the woman was wearing sunglasses. However, on a closer look, you could see that it wasn't sunglasses, but black holes dug where her eyes should be.

The public became aware of the story after celebrities such as Park Shin-hye, Park Hee-jin and Tak Jae-hun told about their encounters with the woman on TV. It seemed like the ghost was standing on the road trying to catch a ride.

The TV station tvN even called an exorcist to help explain the phenomenon, and viewers were told that it was the spirit of a woman in her 20s who had been strangled and killed close to the location. Passing near the Han River and Ilsan Lake Park, Jayu-ro is not very well lit, and the fog can be quite thick.

Some argue that the ghost is merely an optical illusion created on dark and foggy nights.

But with many people sure of what they have seen, we find it difficult to dismiss as just coincidence.

Woman With A Red Mask 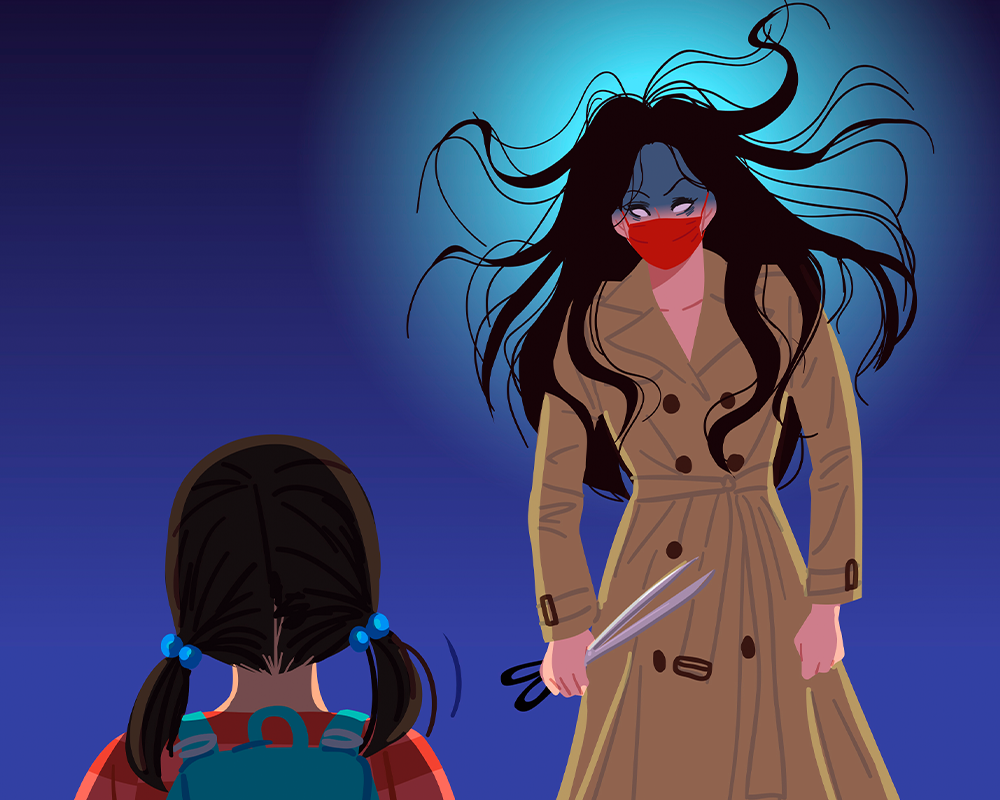 The story about a woman with a red mask was very popular in South Korea a decade or two ago.

It seems like the urban legend started in Japan, came to Korea, and it has now spread throughout East Asia.

The story goes as follows. A woman wearing a red mask approaches you and asks, "Do you think I'm pretty?"

If you answer that indeed, you think she is pretty, she will take off her mask, revealing her mouth which is horribly slit from ear to ear.

"I'll make you as pretty as me!" she says, and goes on to rip the corners of your mouth open. There are currently several versions of the story circulating in Korea.

One version tells that the victims of the red mask woman will have their mouths slit open differently depending on their blood type.

If you have blood type A, you get away with just a little cut. People with B type are cut a bit deeper, and AB types have to suffer from getting their mouths cut open to the length of a wide smile.

People with O type draw the shortest straw however, as they will have their mouths cut open from ear to ear.

Others insists that there are evil spirits wearing masks of different colors.

If you encounter a man with a blue mask, he's likely to rip your mouth vertically rather than horizontally.

White mask? That might be the surgeon who initially slit the mouth of the red mask lady.

A spirit wearing a yellow mask will have a foul, suffocating breath.

Another apparition with a black mask is actually trying to track down the woman with a red mask to kill her. 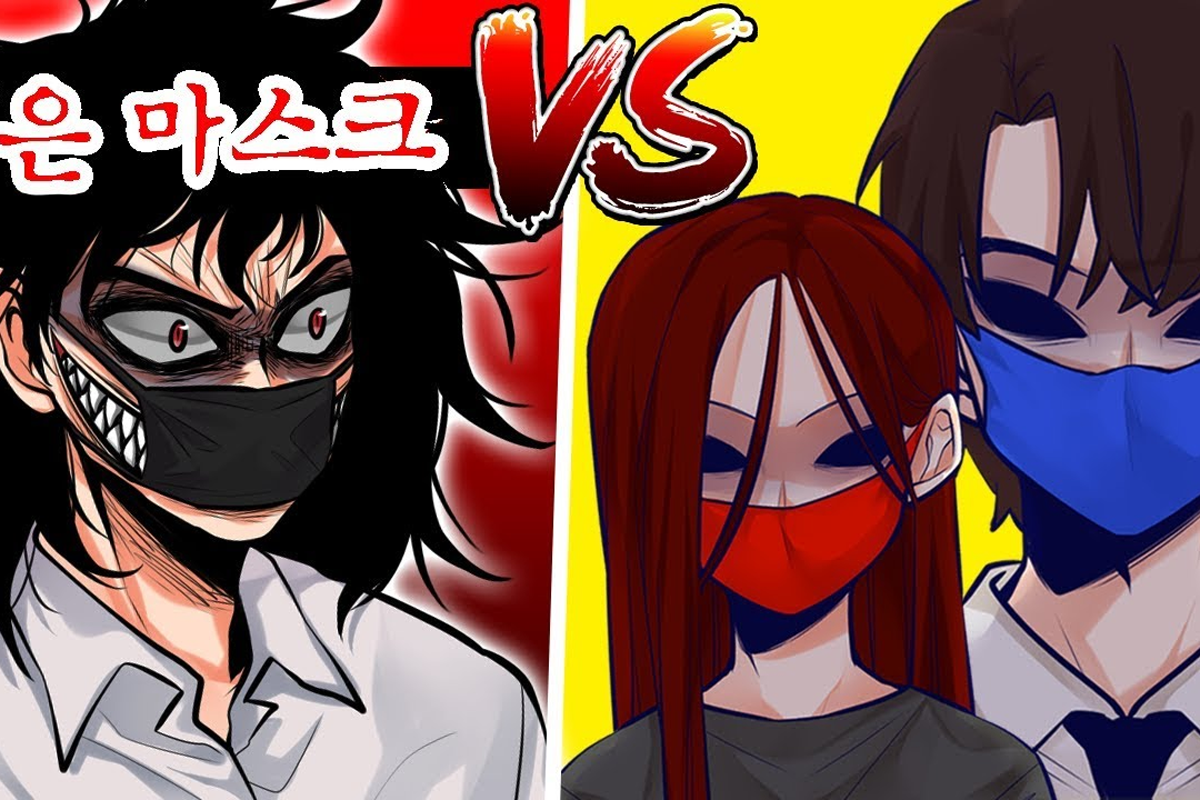 With so many different versions of evil spirits wearing masks, children used to discuss the best course of action to take depending on the type.

Many agree that a way to escape the woman with a red mask is to run up to the second floor of a building or look for a dog.

These days, when everyone wears a mask, we don't know who we can trust!

Want to see how the Japanese depict the woman? Click here to see how she looks like in the 2007 horror film Carved: The Slit-Mouthed Woman. 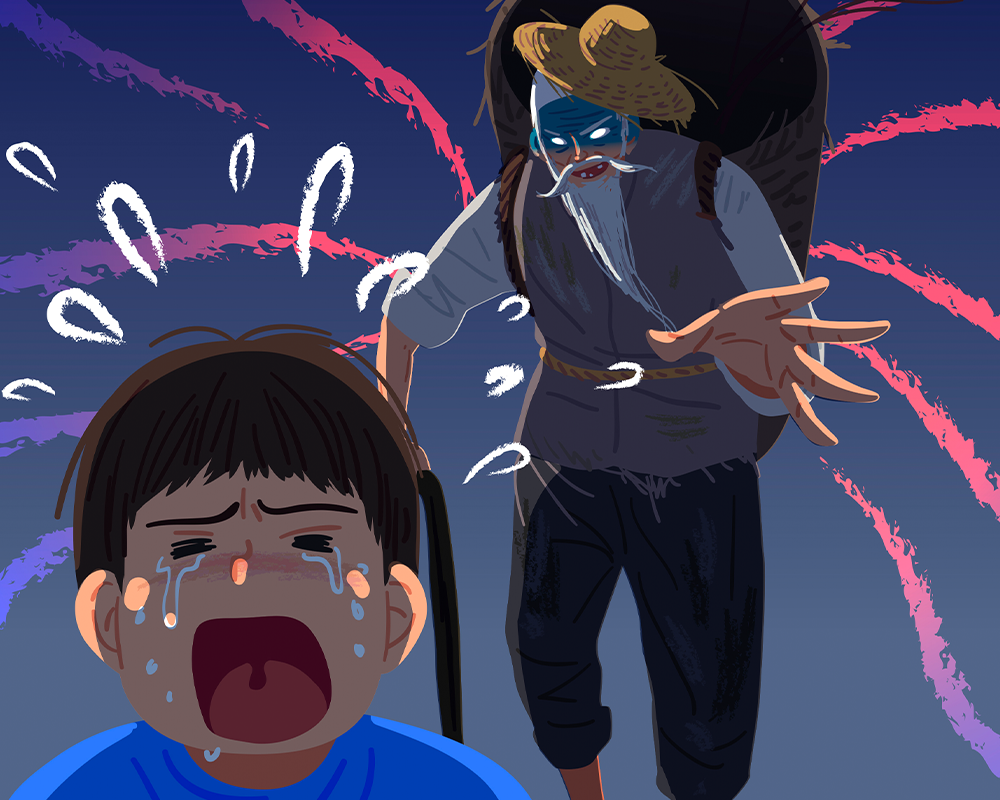 The Sack Man (망태기 할아버지) refers to an old man who carries a sack on his bag.

망태기 (Mang-tae-gi) is a traditional Korean sack made of straw to carry things. Sounds almost like Santa Claus, right?

But although some children are scared of Santa, it's nothing like the fear that Sack Man strikes into the heart of young Koreans. 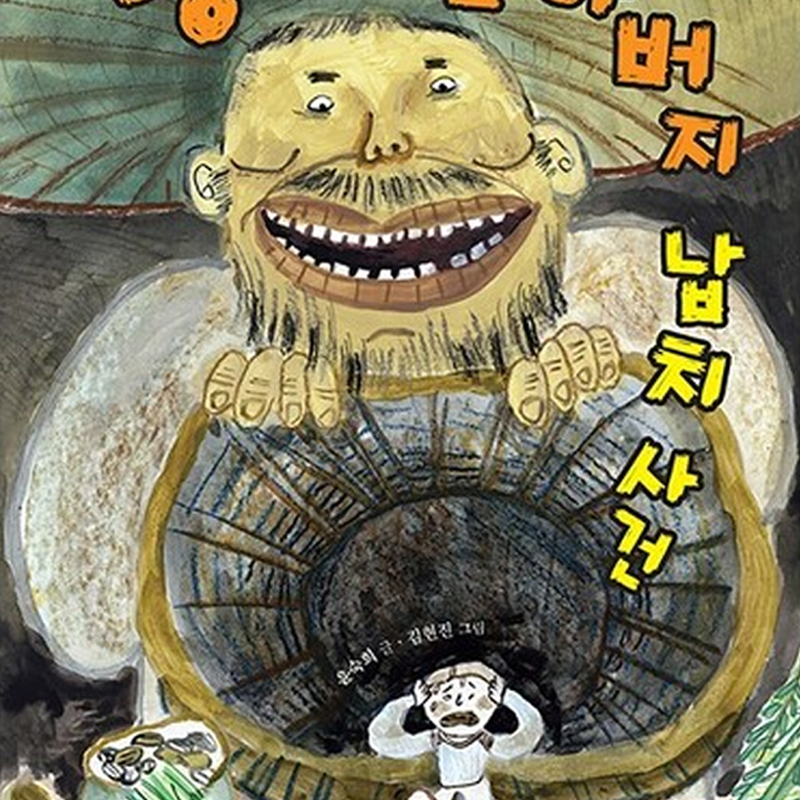 It's said that children who don't listen to their parents will be put in a sack to be taken away by an old man.

What happens to the children?

Some stories tell that the old man devours them, others that he gives them a scolding before sending them back home.

Korean parents sometimes use the story to make their children behave. "If you don't listen to what we say, the Sack Man might come to take you!" The Hong Kong Grandma is an urban legend that was popular in the late 80s and early 90s.

Why would a grandma from Hong Kong be scary?

The story goes that the plane of an old woman who was traveling from Korea to Hong Kong crashed.

The woman died, but just before she drew her last breath, she mystically merged with the cat she had brought with her, turning her into a half-human, half-cat ghost.

The woman-turned-ghost is said to kidnap and murder children in the middle of the night. Her cat-like abilities make it impossible to escape her as she can both run fast and jump high. This urban legend was spread throughout Seoul, scaring many elementary school students at the time. Some children refused to go to school because of the story.

The myth was so widespread that it even appeared on MBC News in 1989! 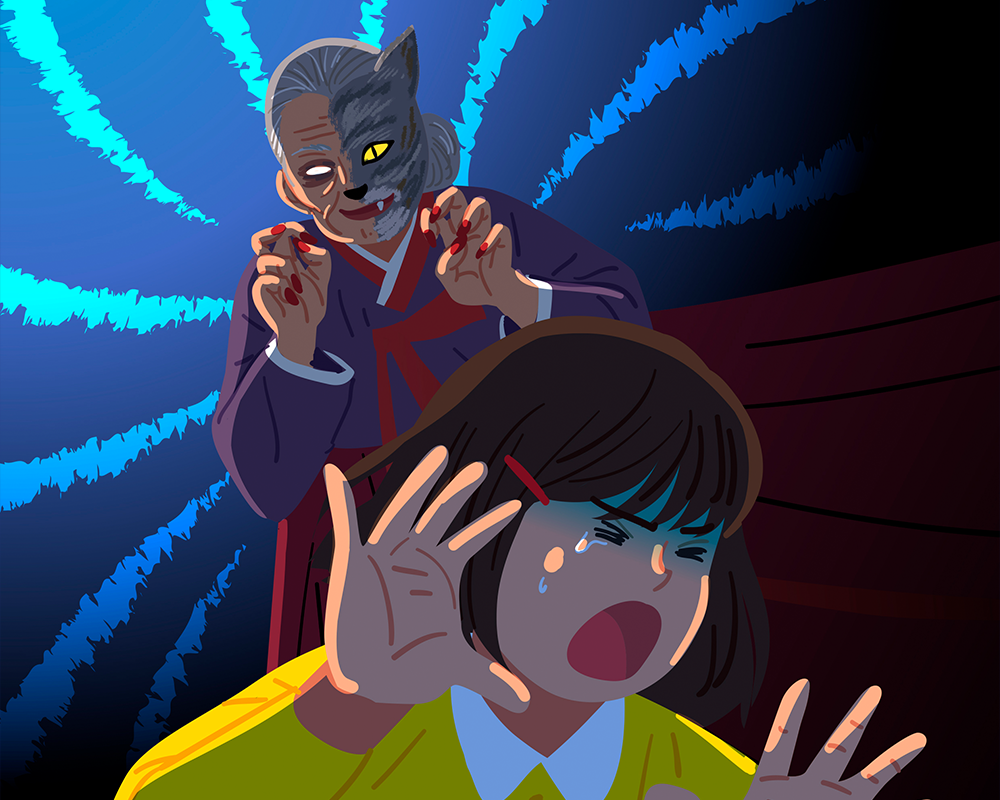 However, there are no records of any plane crash of an airliner going to Hong Kong from Korea. So what are the origins of the legend?

Some argue that child abductions and human trafficking were so frequent in Korea at the time that parents in the Gangnam area made up the story, making sure that children would come home straight after school! Although it's less common these days, in the past, Korean schools would often stay open until 10 or 11 pm for night self-studies.

The Kong Kong Ghost story is an urban legend that started to spread among students who stayed until late at school.

The story goes as follows. There used to be a student who always had the second best grades in her school.

She resented the student who always beat her. Her own greed along with pressure from her parents made her kill her rival by pushing her off the rooftop, disguising it as a suicide.

The murdered student turned into a ghost which is called the Kong Kong Ghost. 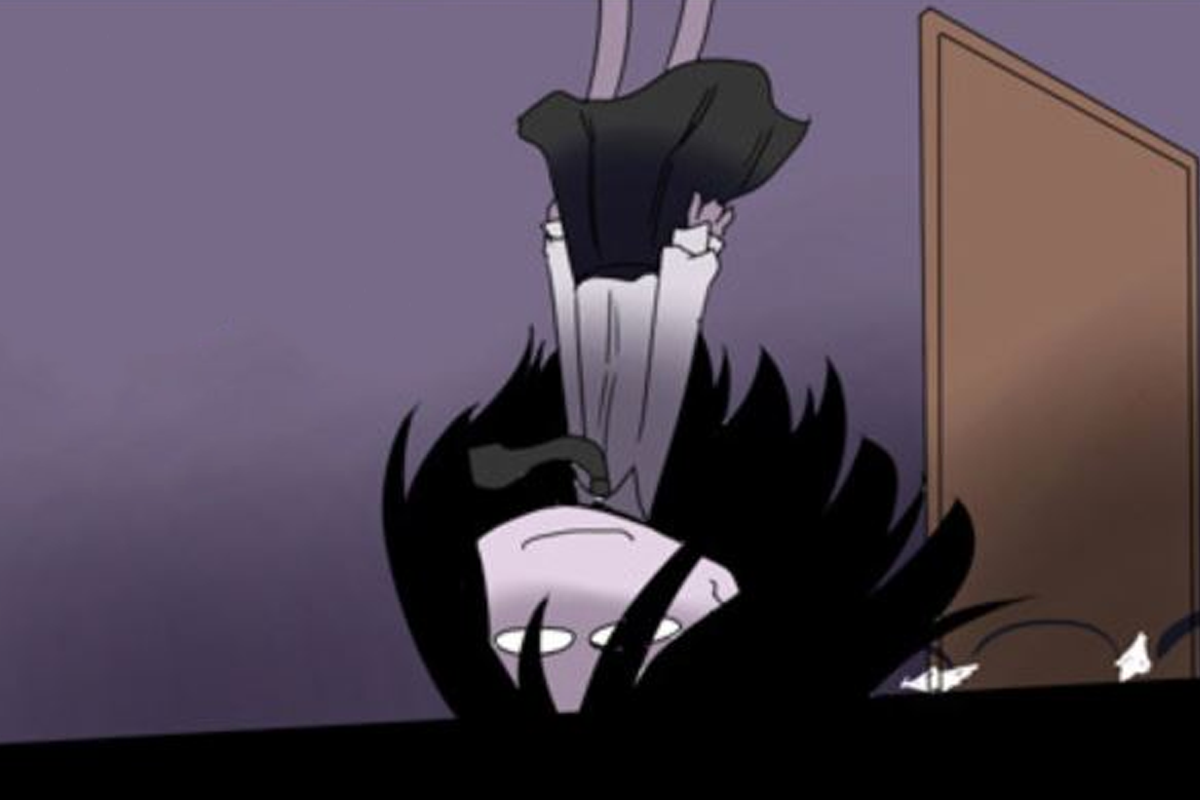 When she was pushed off the roof, the student landed with her head first. She now has to move by jumping, her head on the floor. Kong Kong refers to the thumping sound that the ghost make as she moves around.

If you've ever been to a school after dark, you know that that the usually lively school suddenly turns very eerie. No wonder that the urban legend started to spread among students! We continue on the theme of school related ghost stories.

Statues are often erected on school grounds in South Korea.

They might be statues of Korean historical figures such as Admiral Yi Sun-sin, King Sejong, or independence activist Yu Gwan-sun.

A widespread myth has it that these statues come to life at midnight.

Each school has a slightly different version of the story, but common themes are that they cry tears of blood, or that they start walking around the school grounds.

Many stories tell that anyone who sees this will end up dying. 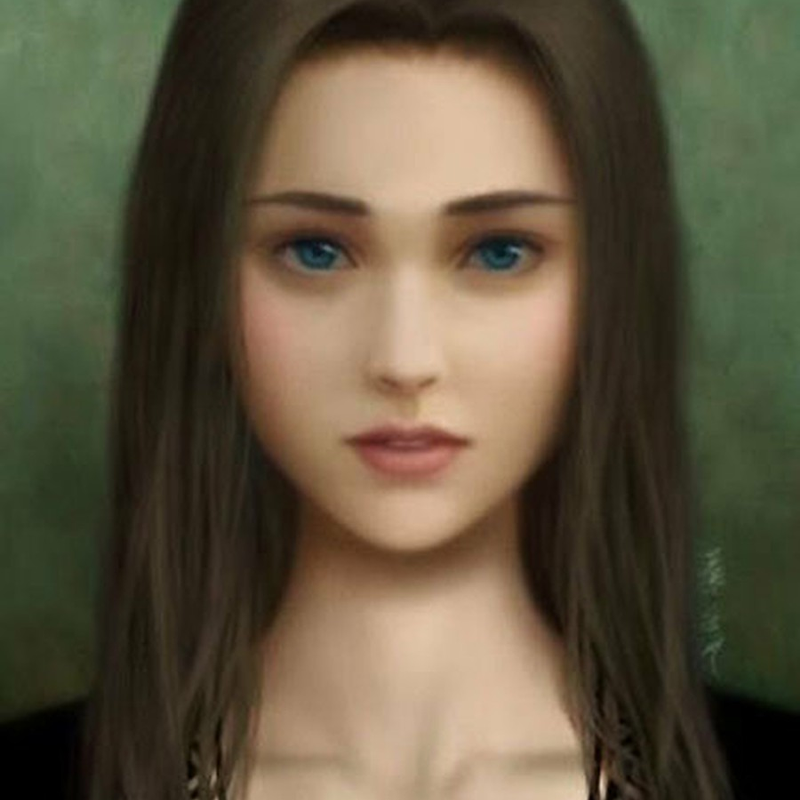 If there aren't any statues on the school, students instead have to be careful of portraits on the walls inside the school.

Around midnight, you might find that the eyes of the people in the portraits begin to move. But beware, if you make eye contact, you will die.

Students in Korean schools are often seen daring each other to stare at the portraits on the walls! 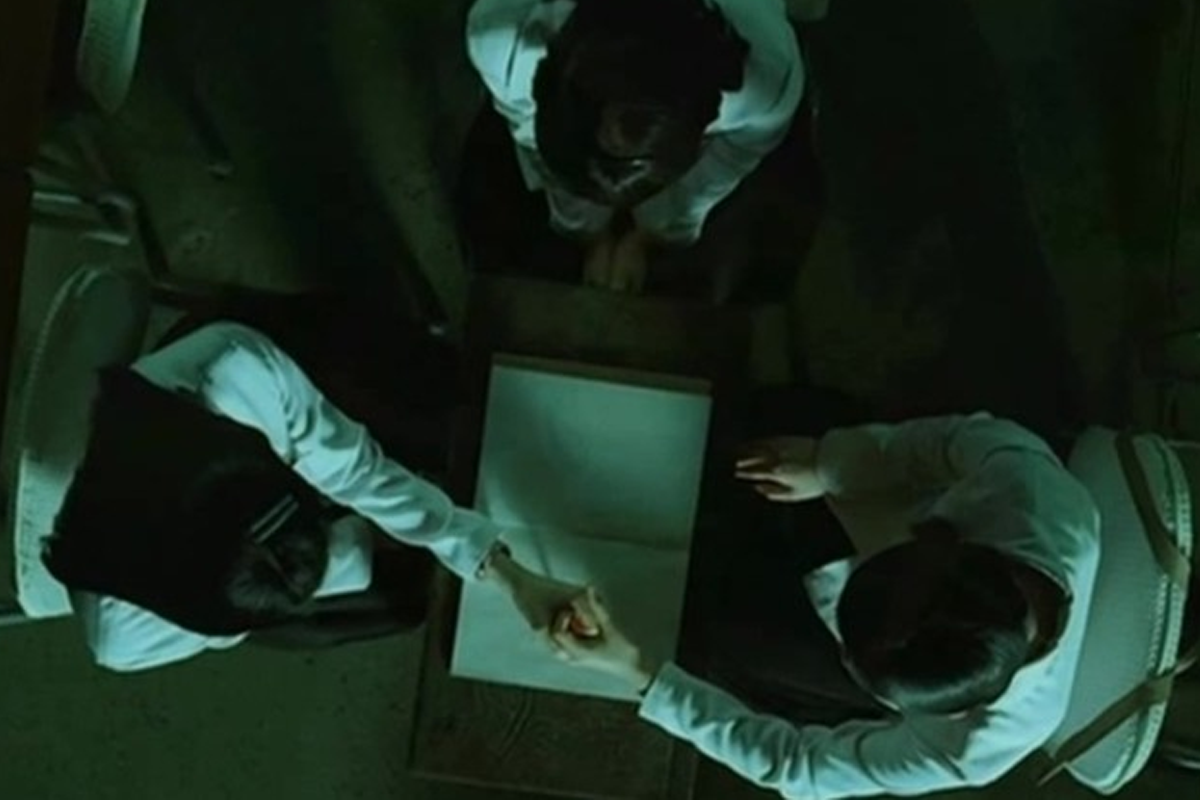 Bunshinsaba is the name of a spell used when summoning spirits. Originating in Japan, the game is also widely spread in Korea.

You only need two things to play the game – a piece of white paper and a pen. Although pencils or ballpoint pens all seem to be serviceable, most commonly a red pen will be used.

After drawing O and X on the paper, the two persons summing the spirit will sit face to face and hold a pen together.  Using the spell bunshinsaba, a spirit is summoned.

The participants can then ask questions to the spirit, for example, "Oh, spirit, are you with us?" If the pen moves to an O, it means that the spirit has been summoned.

You can finish the game by asking the spirit, "Please return now." If the pen moves to the O, it is safe to finish. However, if you decide to end the game without asking for permission, the spirit may seek you out to cause you harm! The game was very popular among young Koreans some years ago, and many Korean students have sat down face to face to read out the spell and summon a spirit.

In 2004, a horror movie based on the game was released! 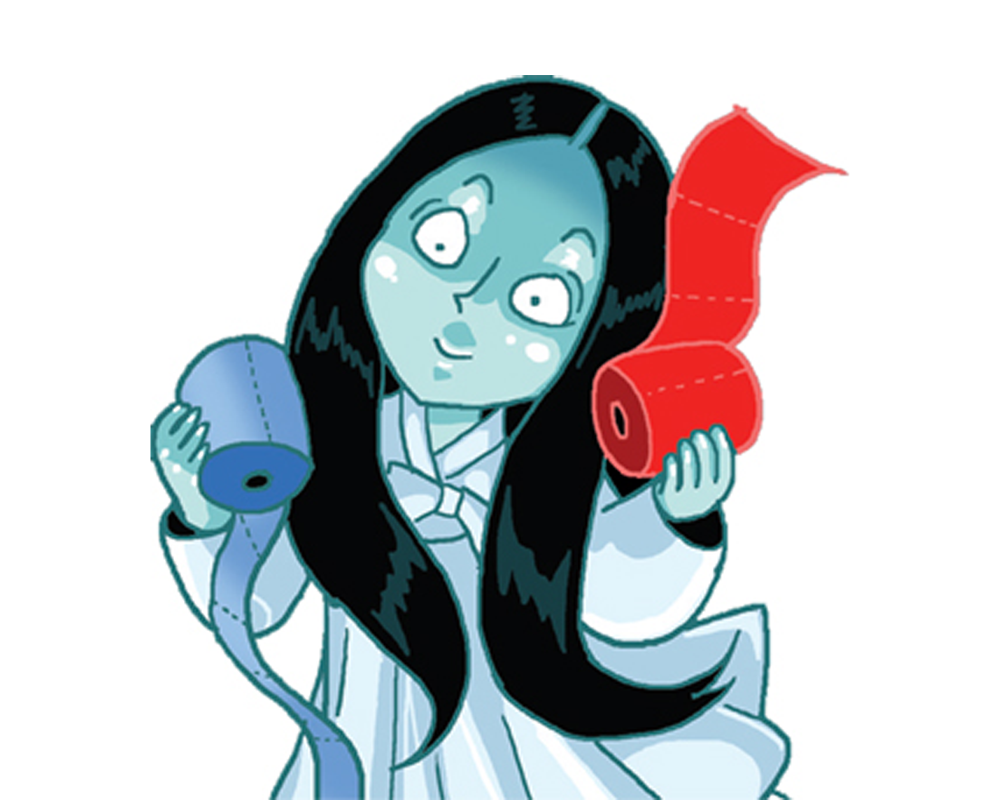 The next urban legend is also popular both in Japan and Korea.

A few decades ago, squat toilets were still the most common kind of toilets in Korea.

There is a myth that while you are squatting down and minding your business, a voice from below will suddenly ask whether you want red or blue toilet paper.

What color should you choose? There are a couple of different versions. The first version tells that you will die if you choose the red toilet paper, whereas the blue paper means that you get to live.

Another version has is that choosing the red paper will lead to your neck being cut off, drenching your whole body in blood. But choosing the blue paper means that you will have all the blood in your body being sucked out, turning you into a pale corpse. In other words, it's a lose-lose scenario.

Some say that if you reply "I don't need any paper!" or ignore the voice, you get to live.

What would you answer?

Ghost In The Elevator Mirror Lastly, there is also an urban legend about elevators.

There are usually mirrors on both sides of elevators. The two mirrors facing each other create an infinity mirror, meaning that you can see an endless number of objects in the mirror.

The elevator mirror ghost myth began as a result of this. It is said that you should be especially scared of your fourth and thirteenth reflections.

Although the ghost looks just like you, you will immediately realize that something is off. The ghost can move at will, even if you are standing still.

And if you make eye contact with the ghost, you will end up dying soon.

Many Koreans are therefore careful just to look at the first reflection in the mirror while in the elevator. You just don't know what might happen if you look at the other reflections behind you! 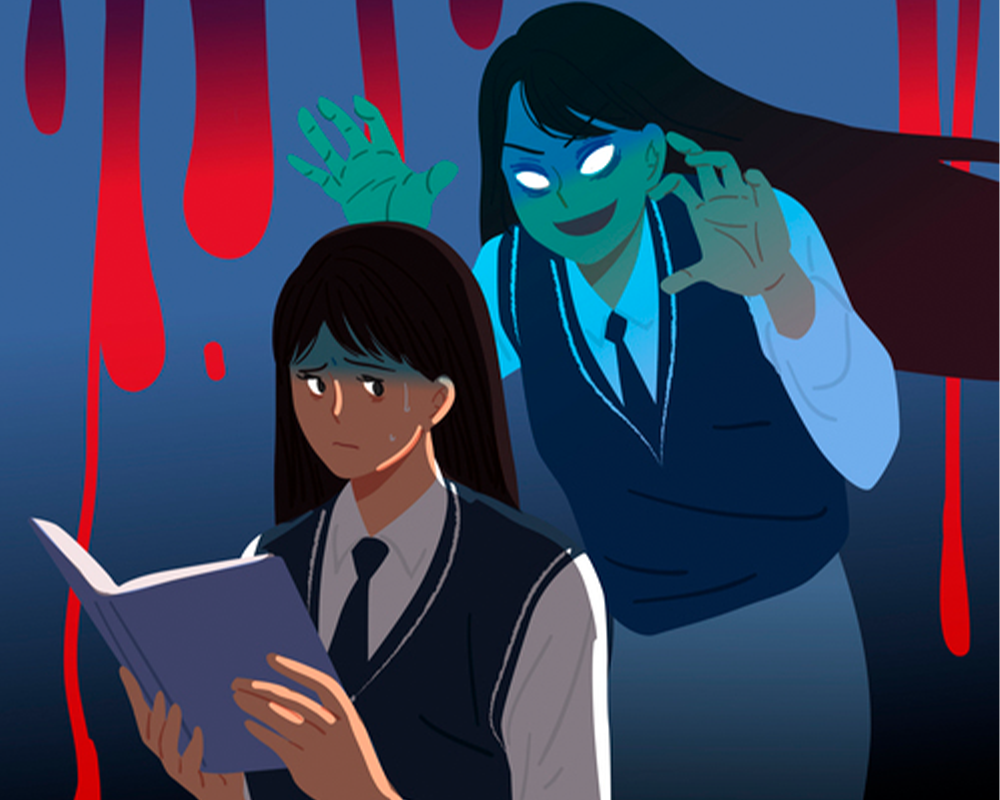 That wraps up this article about Korean urban legends. Were they scary enough to make you forget about the summer heat?

What urban legends are popular in your country?