Creatrip: How The Average Height In Korea Changed Over The Years

How The Average Height In Korea Changed Over The Years

How did the average height of Koreans grow 20 cm in 100 years? A history of heights of Koreans and a closer look into factors including food consumptions and preferences. Many Koreans tend to be obsessed with height. From foods to help them grow to growth hormones to growth clinics, parents work hard from an early age to help their child grow tall.

So how tall are Koreans? Are they all tall like celebrities? And what height would they prefer in a partner?

Today we'll dive into the height of Koreans! Oh, and since statistics are so diverse, please be aware that there may be an error of about 1-2 cm for each.

The Average Height Of Koreans

Based on the numbers by Statistics Korea in 2020, the average heights of Koreans is as follows.

By looking at the numbers, you can get a rough idea right? I'll give you some more examples with visuals! BTS Jimin and Suga are the average height of Korean men in their 20's! Red Velvet Seulgi and Twice Momo are the average height of women in their 20's. These women have good proportions so they look taller than they are but you can get a good sense!

According to a study by Imperial College London in the UK, Korean men ranked 68th in height and women ranked 60th at 19 years old. 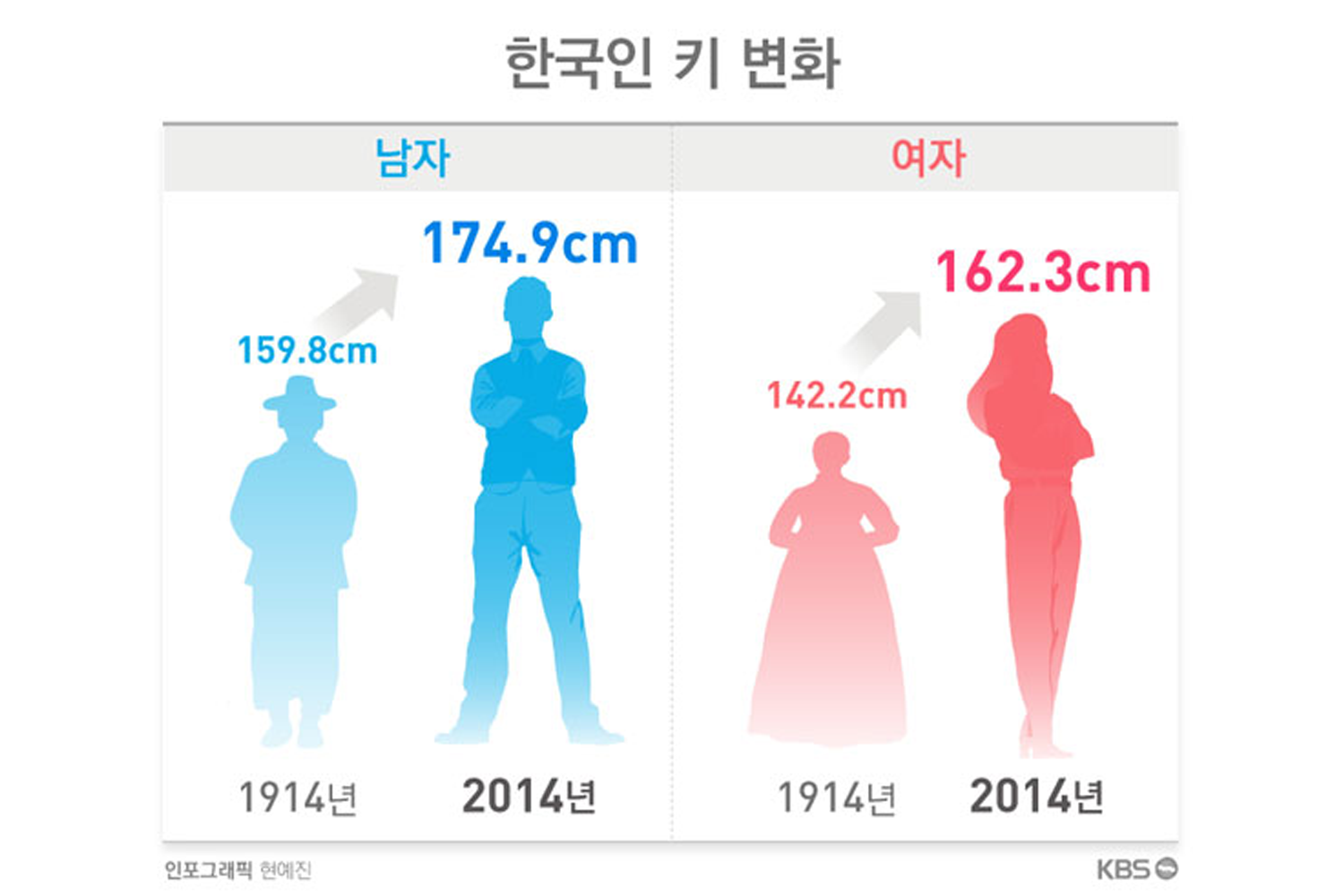 In fact, it is said that Koreans have grown the most in the world over the past 100 years.

Even within the family, you can notice a difference in height from generations. Let me show you an example. This is a photo of my family taken a few years ago. The far left is my father, the middle is my grandfather and the far right is my brother.

Although height decreases gradually when you age, there is a noticeable difference between each generation.

What has happened in Korea in the last 100 years for the average height to increase like this?

Why The Average Height Increased

Nutrition is probably the biggest reason why the average height increased. Korea began to modernize at the end of the 19th century and achieved rapid growth in the 1970s and 80s! The photo above on the left is from the 1950s and the right is the present.

Surprisingly, both are photos of the Seoul landscape from Inwangsan. You can really see how it has developed over the last 70 years! Before its modernization, Korea heavily relied on agriculture and children couldn't get enough nutrition due to the poor state of the country.

My parents tell me that if they also got enough nutrition as we do now, they'd have grown more as well.

In other words, most people these days get a lot of nutrients so they grow a lot taller.

Also, rather than simply increasing the amount of food consumed, the changes in the food have a lot of influence as well.

In fact, Koreans were known to eat a lot 100 years ago too! Western missionaries who visited Korea in the past are said to have been amazed at how much Koreans ate.

One missionary even left a record saying, "The average amount of a worker's meal is 1 liter of rice. Many people easily eat more than 2-3 servings. An old man emptied five bowls even though he claimed to have no appetite."

Even though they ate so much, why didn't they grow? It is because of the lack of meat consumption! Koreans farmed a lot, but because meat was so precious, ordinary people ate much more rice than meat.

Can you believe the size of that bowl on the photo above?

I was really shocked when I saw the photo for the first time. That's almost enough to feed a family of 4! These various kinds of Korean full-course meals (Hanjeongsik) could only be eaten by royals, and commoners could only eat rice and simple side dishes. A Korean ceramics company compared the sizes of rice bowls by each time period. It is said to have been about 680ml in the 1940s, and about 190ml now.

680ml is almost four times our bowls now! I haven't seen anyone around me eat that much. If you are a Mukbang Youtuber, then maybe! You probably know many meat dishes that Korea is known for such as chicken, galbi, samgyeopsal and more! Don't get the wrong idea though, Koreans still LOVE rice!

There is also a saying that Korean desserts are fried rice. Whatever we eat, we ALWAYS eat fried rice at the end.

Many of my friends actually prefer the fried rice at the end more than the main dish.

The Difference Between North Korea

We can see that nutrients impacted the average height increase of South Koreans when compared with North Korea. There is about a 7cm (2.7 in) difference when compared with South Koreans.

Even though South Koreans and North Koreans share the same gene, the difference is that many people in North Korea can't get proper nutrients because of the economic situation there.

Will The Height Continue To Grow? If the average height of Koreans has grown significantly over 100 years, wouldn't it be possible to grow even taller in the future?

However, statistics show that there hasn't been a huge growth recently. These statistics are accurate as Korean men go through physical examinations to go to the military.

There may be limitations in genes, but it seems to also be related to the amount of sleep people get. The average hours of sleep for Koreans is 7 hours and 41 minutes, which is almost 40 minutes less than the OECD average.

When researching adults ONLY, the average amount decreased to 6.8 hours only. Students don't get enough sleep due to excessive schooling as university entrance exams approach. Then as an adult, excessive work also affects the amount of sleep they can get.

I remember sleeping only 5-6 hours a day when I was preparing for my university entrance exam. My friends who studied even harder only got around 4 hours of sleep per day.

Each person's preference may differ, but I'll explain what I personally feel as a Korean myself. Also, I'll provide actual data from a survey. First of all, the standard of height for a Korean man is around 180 cm (5'9 ft). This can be used as a standard to determine if an individual is short or tall. 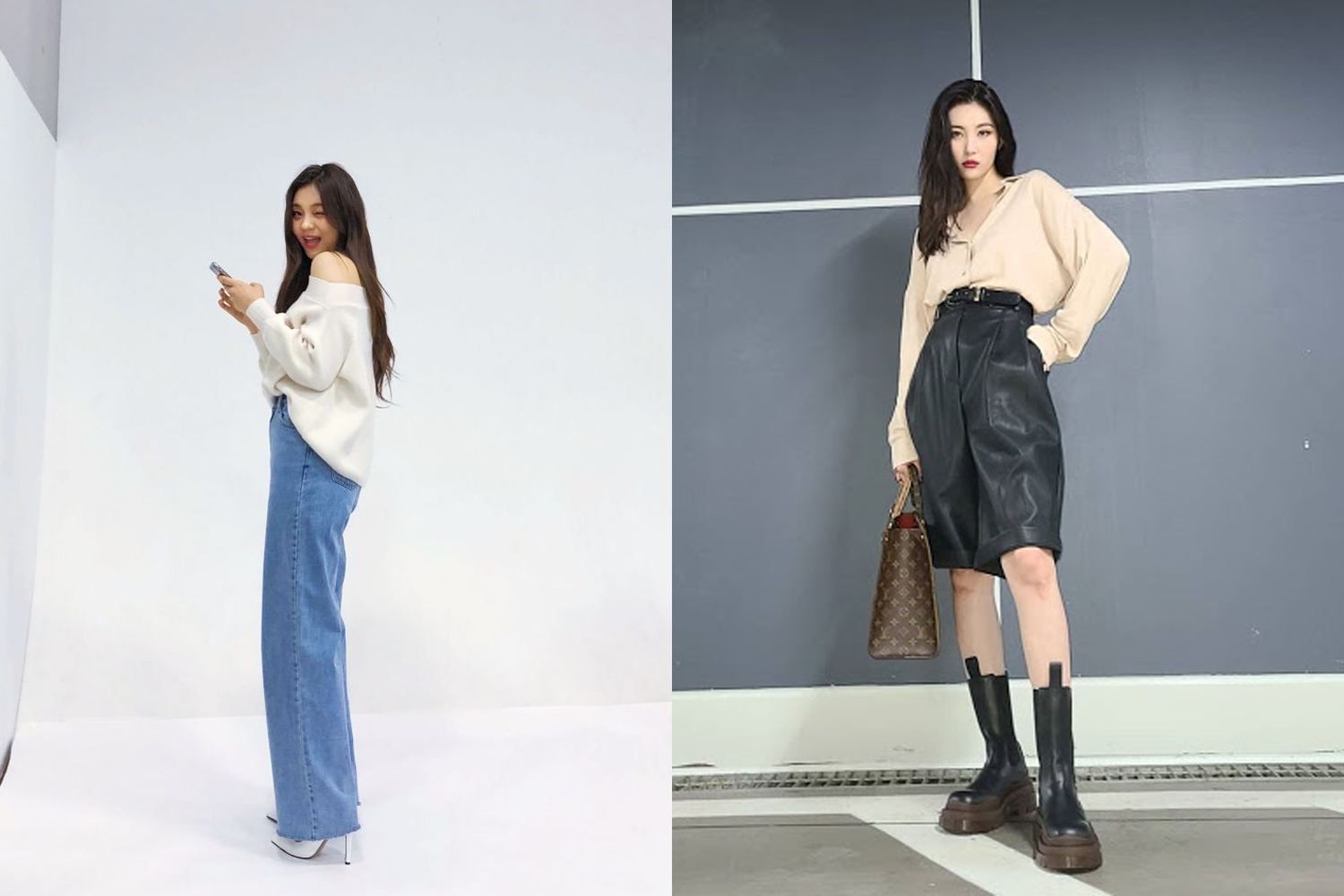 As for Korean women, the standard of height is around 165 cm (5'4 ft). It seems that you're labelled as a tall woman if their height exceeds this number.

These are my personal thoughts, now I will show you some actual data! According to the results of a survey conducted by a Korean dating app Amanda, the most popular men amongst women were 176-180 cm (5'7-5'9 ft) tall. It seems that women certainly prefer taller men, possibly because being tall is linked to masculinity and they feel protected.

On the contrary, men seem to prefer shorter women. Did you learn something new? I learned a couple of things as I was doing my research that I was quite shocked about!

If you have any questions, feel free to leave a comment down below.